This will be the final edition.

We’ll start with a clever video from Kevin James. It could be entitled, Revenge of the Karens.

Next we have a helpful suggestion from the practitioners of coronavirus thuggery.

The clever folks at Babylon Bee have a story about disappointed governors.

Democrat governors across the nation have urged states to continue their lockdowns, saying if they end prematurely, their time in the limelight will be over. …said California Governor Gavin Newsom. “I can’t let this $500 hair cut go to waste. I spend thousands on hair gel alone every month. If I can’t give a press conference every night, it’s all for nothing!” Governor Andrew Cuomo of New York agreed. “We must continue this crisis as long as possible so that people will know who I am,”… A study confirmed the governors’ worst fears, showing that in states with no COVID-19 restrictions, people don’t think about the government much at all and just go about their daily lives. “We can’t let that happen,” said Michigan Governor Gretchen Whitmer.

The people who think that Bill and Hillary Clinton somehow had Jeffrey Epstein killed will like this bit of satire.

For what it’s worth, I always remind conspiracy-minded people that routine government incompetence is usually a better explanation for why things happen.

Next, we have a reminder that the climate alarmists must be very disappointed and jealous that they’ve been displaced by a crisis that actually does kill people.

I wrote recently about Florida’s economic success. Now, let’s look at another story from Babylon Bee, this one about how the Sunshine State is in trouble for its reaction to the virus.

Science says Florida should have seen skyrocketing deaths from COVID-19, but instead Florida — despite its large elderly population — has not seen anywhere near the number of problems faced by states like New York and New Jersey. This has been ruled to be in complete defiance of Science. …Washington Post columnist Jennifer Rubin… “Florida is undermining our trust in Science by not dying. We cannot tolerate this. More Floridians need to die. To die for Science.” California Governor and Science believer Gavin Newsom agreed. “Ron DeSantis is a witch! Burn him!” …There is now a movement by Science-believing Democrats to actively try to infect Floridians to try to get their death count to match projections.

As usual, I’ve saved my favorite for the end.

I’ve acknowledged that there’s much we don’t know about the virus and how to react. But I feel very confident in stating that the most bone-headed decision by politicians has been to endanger ordinary people by releasing criminals while at the same time arresting ordinary people and exposing them to the supposedly coronavirus-spreading justice system.

Which is the message of this Chip Box cartoon.

If you find this cartoon amusing, I highlighted my favorite Bok creations as part of a contest to identify the best political cartoonist.

P.S. I wish some of the ways that politicians have reacted to the virus – such as this, this, this, and this – were satire rather than reality. 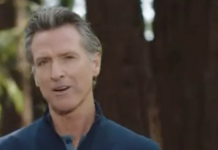 The campaign ad Gavin Newsom doesn’t want you to see. 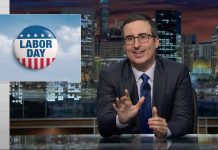