If you live in a home with a gas water heater and notice cold water coming from your hot water faucet, there’s a good chance your pilot light has gone out. Don’t worry: in most cases, you can relight a pilot without calling in a professional, and you’ll have hot water again in a few hours’ time. While having your heater’s instruction manual around is handy, it’s not entirely necessary, as most gas water heaters require a similar procedure for relighting the pilot light.

Assessing the Situation
Check the pilot light. You will probably need to remove a small panel, called an access panel, at the bottom of the tank in order to see whether the pilot light is actually out. If you do not see a small flame burning, then your pilot light has gone out.

If you have a newer water heater, it is possible that your panel is not removable and that you view your pilot light through glass. In this case, if you cannot see a flame burning through the glass, then your pilot light is out.

Make sure there is no leaking gas. You should never try to reignite your pilot if there is gas leaking from your water heater, as this is extremely dangerous to both you and your home. Before attempting to relight the pilot, do a simple smell test to check for leakage.

Stand next to your water heater and see if you detect any unusual smells. Then kneel down and sniff near any valves on the front and side of the tank. Natural gas is odorless by nature, but gas companies add a substance called mercaptan to it to make it detectable to humans. Leaking gas smells like sulfur or rotten eggs.

If you smell gas in either of these places (even a faint smell), do not attempt to relight the pilot. Leave the area of the water heater and call your gas company immediately; they will tell you how to proceed.

Also listen for a hissing sound near the water heater, as this is a sign of a gas leak.

Check inside the door panel of your water heater for instructions. Specific instruction of details for your individual model may be listed here, and they may help guide you in the process of relighting the pilot for your specific water heater.
Preparing to Relight the Pilot
Set the temperature control setting to the lowest temperature. This is typically located on the front of a box found on the outside of the water heater.

Locate the regulator valve. This valve is usually located on the same box as the temperature control, only it’s likely on top of the box; it regulates gas flow to the pilot burner beneath the hot water tank.

Turn the knob to the “Off” position. After turning the knob off, wait 10 minutes before proceeding to allow any residual gas from the tank to clear from the air. Safety is key!

Determine what style of water heater you have. There are two basic styles of gas hot water heaters, “new” and “old.” Old style heaters will require you to use your own flame to relight the pilot, while new style tanks come equipped with a pilot light igniter.

The exact look of the buttons on new style tanks may vary, but many have a red igniter button set a few inches away from the temperature and regulator valves.

Collect any necessary lighting materials. If you have an old style water heater, you will need to find a long reach “wand” lighter or fireplace matches to relight the pilot.

Do not attempt to relight a pilot with a regular matchstick or a small cigarette lighter, as this will require placing your fingers in a small, tight space too close to the open flame and put you in danger of getting burned.

Find the pilot. The pilot is located at the end of the small silver tube that comes out the control valve. You may need to use a flashlight to see this area clearly.

Relighting the Pilot Light
Turn the gas valve to the “Pilot” setting and push down on it. Doing this starts the flow of gas into the tube that supplies the pilot light

If your water heater’s gas valve does not push down, look for a red control button near the valve. Hold this button down.

Light the pilot burner. While holding down the pilot gas valve or the red button with one hand, you will use your other hand to quickly light the pilot.

Because you will be using one hand to depress the valve/red button and one hand to light the pilot, you may need someone to hold a flashlight for you if extra light is needed. Try to ask someone for help in advance so that you don’t get halfway through the process, then have to stop because you are unable to see what you’re doing.

Continue holding down the gas valve or control button for 1 minute after the pilot light has been lit. This will heat the thermocouple, which is a sensor that shuts the gas off when the pilot is out.

Replace the access panels. If the pilot light has remained lit, put the access panel back into place (if you had to remove it initially) so that no flame can escape into your home.

Reignite the main burner. Turn the main gas valve back “On” and adjust the temperature control to your desired setting. The main burner under the tank should light and begin heating the water in the tank.

Set the thermostat to your desired temperature. Be sure not to make it too hot, as you could inadvertently scald your hands or body while washing or bathing. 49 C (120 F) is the temperature recommended by the Consumer Product Safety Commission.

If the Video above didn’t work for you:

Tips
If this process does not work, make sure the base of the pilot light is not dirty or clogged. If it is, clean it and attempt this process again after 10-15 min. You can also try holding the valve/control button 30-45 seconds longer after igniting the pilot light.

Low gas pressure or a malfunctioning gas valve may also be to blame if this process doesn’t work. Contact an appliance repair person, a plumber, or your gas company if you are unable to light the water heater after several attempts.

If the pilot light doesn’t relight or goes out immediately after relighting, you may have a bad thermocouple. The thermocouple extends from the temperature control into the flame area of the pilot light. They are relatively cheap, and you can install one yourself.

Squirrel Warnings
If you smell gas anywhere in your house, call your gas company immediately. Even a “little bit of gas” is too much.

Do not turn the gas valve back on until you have replaced the access panels. Doing so could cause a flame to come out of the water heater.

And from the International Association of Certified Home Inspectors: While many inspectors and homeowners may not be aware of the danger, a number of houses are destroyed every year when a pilot light ignites the explosive gasses released from insecticide “bug bombs” and foggers. A fire erupted in a Newburgh, Ohio house after a man placed a roach fumigator under his kitchen sink and the fumes reached his oven’s pilot light. Even worse, when homeowners employ a recklessly large number of these foggers, they can generate enough gas to create a catastrophic explosion, and the determination of homeowners driven mad by cockroaches and fleas is occasionally enough incentive for them to employ such overkill. In one case, 19 foggers were 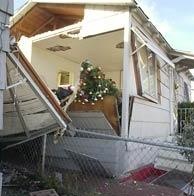 unleashed in a 470-square foot San Diego home, filling the building with so much gas that the pilot light destroyed the home and launched shrapnel into the street. Fortunately, foggers are typically used in buildings that have been vacated. Three men were hospitalized, however, when an oven’s pilot light in a Thai restaurant in Perth, Australia ignited the gas released from 36 foggers – enough to blow the roof off the building in a massive explosion that rocked the suburban neighborhood, causing $500,000 in damages.